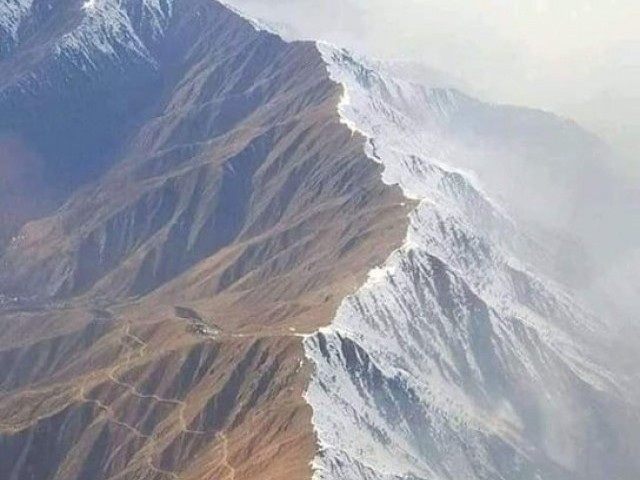 Aerial view of Chiltan Mountain after yesterday’s snowfall on Quetta side of the mountain. PHOTO: @charnushah (TWITTER)

QUETTA: Quetta, Ziarat and northern areas of Balochistan witnessed the second spell of snowfall on Saturday forcing the closure of Quetta-Ziarat National Highway for traffic.

Queues of vehicles were stranded at Khojak top near Chaman after heavy snow.

Amid freezing temperatures, gas pressure reduction and load shedding added to the miseries of the people in parts of province, including Quetta. Citizens faced difficulties in the severe cold.

According to details, a new spell of snowfall has started in northern areas of Balochistan including Quetta valley, Ziarat, Kahan Mehtarzai, Khanozai, Toba Achakzai, Toba Kakri, Mastung and other areas.

Snowfall in Quetta intensified cold while tourists flocked to Ziarat and Kan Mehtarzai for holiday.

Meanwhile, Quetta-Ziarat National Highway was closed due to heavy snowfall.

According to Deputy Commissioner Bashir Khan, snowfall on Quetta-Chaman highway forced the closure of route for traffic at Khojak point. The administration is busy removing snow through heavy machinery at the spot, he added while also appealing to the citizens to avoid unnecessary travel on the route.

“Communication and Works and Irrigation departments need to be more alert to keenly monitor the situation on highways and dams,” said Kamal directing PDMA officials to prepare for handling any emergency-like situation.

On the directions of the chief minister, equipment was delivered in Shela Bagh, Kan Mehtarzai and Ziarat to ensure timely relief.

“Strict action will be taken against absent staff members and officers if they didn’t ensure their presence on duties,” Mengal said.