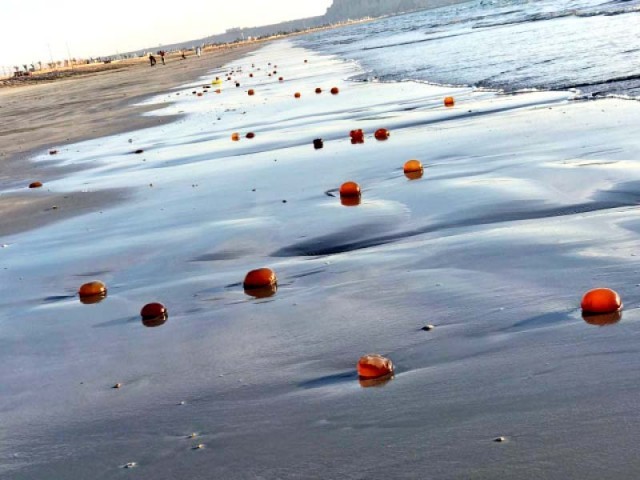 Numerous jellyfish have washed onto the Sindh and Balochistan coast from the Arabian Sea. The latest jellyfish blooms appeared in December 2019 and may be a result of over-fishing and climate change. PHOTO: COURTESY WWF-P

KARACHI: Large blooms of jellyfish have been observed in the Arabian Sea and the Gulf of Oman, affecting major fishing operations in the area.

According to marine experts, as the blooms have spread, they have brought fishing operations to a near halt in the offshore waters by choking trawler nets, affecting the livelihood of thousands of fishermen.

Research by the World Wide Fund for Nature-Pakistan (WWF-P) indicates that the latest blooms appeared here in December 2019. They are distributed widely and have begun spreading to beaches along the Sindh and Balochistan coast.

Jellyfish had previously formed unprecedented blooms in the area in 2002 and 2003, impacting fishing in Iran, Oman and Pakistan. In December 2016 too, large blooms of stinging jellyfish appeared from Karachi to Ghora Bari and in Ormara. Not only did these clog fishing nets, they also inflicted painful stings to the fishermen attempting to remove them from their nets.

“Fishermen involved in gillnetting and other fishing operations moved to other areas and are now mainly operating in Sonmiani Bay and adjacent waters,” said Muhammad Moazzam Khan, the WWF-P marine fisheries technical advisor

He explained that the jellyfish clusters appear to be a result of over-fishing, eutrophication and climate change, adding that they are now frequently reported in many parts of the world. He emphasised that more research was required to determine whether they are a function of natural cycles or the result of human impact on the environment.

“It is generally believed that climate change and warmer sea temperatures favour the increase of jellyfish in massive numbers,” stated Dr Babar Khan, the WWF-P regional head from Sindh and Balochistan, while adding that the factors at play were not yet fully understood. “Overfishing is also thought to increase jellyfish populations because it eliminates their predators and competitors.”

Muhammad Ismail, a WWF-P trained fisherman who has been netting tuna for over two decades, voiced his worries, saying that he – along with 300 of his fellow skippers – had stopped fishing for the last two months.

Meanwhile, Sher Zamin Khan, another skipper, initially shifted his operations from Karachi to Gwadar. As the bloom spread along the coast, he ended up working on small fishing boats that operate within the Gwadar Bay.