Editor’s note: Hamzah Rifaat Hussain is a former visiting fellow at the Stimson Center in Washington, and currently serves as assistant researcher at the Islamabad Policy Research Institute (IPRI) in Pakistan. The article reflects the author’s opinions, and not necessarily the views of CGTN.

August 14, 2020 marks Pakistan’s 74th Independence Day. It is celebrated with great zeal and fervor across the country. Pakistan, a long-standing friend of China has confronted numerous but surmountable challenges throughout its history which has included maintaining cordial ties with states in its neighborhood and the United States.

Pakistan’s relationship with Beijing were officially established in 1951 and has continued to blossom with China enjoying widespread, positive coverage across the country. Pro-China sentiment has grown over the years with the opening up of numerous avenues of cooperation between the two states.

China continues to be one of the central pillars of Pakistan’s foreign policy with widespread public acknowledgment that the relationship rests upon goodwill, trust and an everlasting strategic partnership.

In hindsight, Pakistan has encountered significant challenges over the past 73 years which includes tackling terrorism, three wars fought with its neighbor India, an economy struggling with sovereign debt and high rates of unemployment amid periodic civilian and military rule.

Coupled with internal challenges have been difficulties on the foreign policy front with Islamabad’s rivalry with India complicated with tense relations with Afghanistan and outstanding differences with the Islamic Republic of Iran.

Its relationship with the U.S. has also been complex where close cooperation between the two capitals in the 1980s against the Soviets resulted in the rise of regional domestic extremism but later blow-backs from the 9/11 intervention in Afghanistan negatively impacted Pakistan.

In addition, India’s strategic cooperation with the U.S. left Pakistan increasingly isolated without due recognition of its achievements in curbing homegrown extremism or innumerable sacrifices in the line of terror.

Against this background, over the years, China has stood out as the only state which not only recognized Pakistan’s achievements but urged the international community to appreciate Pakistan’s stance on battling terrorism and its genuine security concerns.

U.S. attempts to violate Pakistan’s state sovereignty have proven to be contentious where the employment of drone attacks, targeting Islamic militants within Pakistan’s borders, resulted in increased animosity towards Washington D.C. with the emboldening of various extremist groups posing a threat to regional peace and security acting as a blow-back.

Conversely, on the subject of extremism, Chinese concerns over the presence of the terrorist groups on its borders with Pakistan, resulted in Islamabad initiating a crackdown against the militants with Beijing respecting Pakistan’s sovereignty and relaying trust in respective Pakistani leaderships to tackle such spoilers.

Consequently, the trust deposited in Pakistan by China on numerous fronts has resulted in popular public opinion across the country to be in Beijing’s favor with 75 percent of the world’s fifth most populous state holding pro-China views in 2014 in contrast to largely negative sentiment directed at the U.S. during the same period. 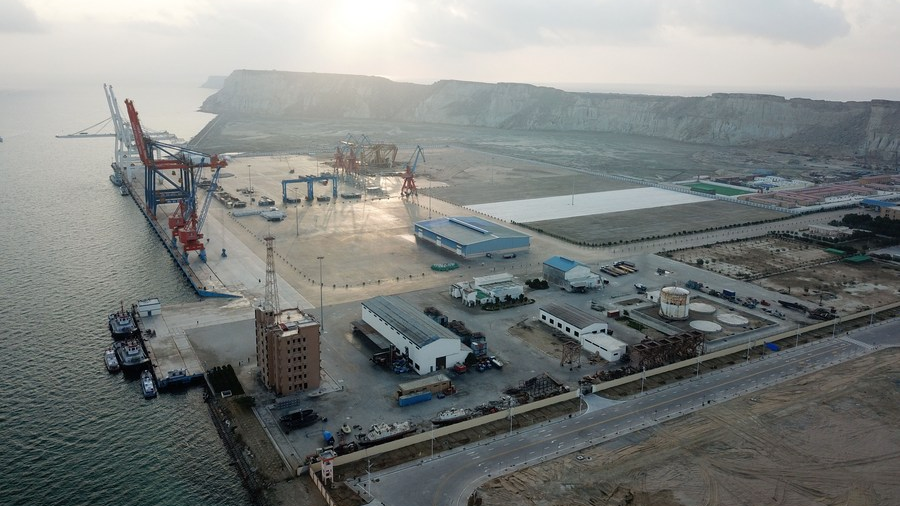 A view of Gwadar Port is seen in southwest Pakistan’s Gwadar, on January 29, 2018. /Xinhua

A view of Gwadar Port is seen in southwest Pakistan’s Gwadar, on January 29, 2018. /Xinhua

Pakistan’s relationship with China has not witnessed any setbacks with Islamabad’s ability to forge an all-weather friendship with other states proving to be a challenging task, even with countries such as Saudi Arabia which has been a key investor in Pakistan’s economy with which Pakistan enjoys fraternal ties with.

On the subject of the Kashmir dispute for example, Pakistani Foreign Minister Shah Mehmood Qureshi expressed disappointment at the Organization of Islamic Cooperation’s inability to convene a meeting of its Council of Foreign Ministers on India’s unilateral move in the dispute valley, which was directed at Saudi Arabia as the lead convener.

While attempts are being pursued to repair the relationship with Riyadh, such disappointments, obstructions or setbacks have been completely absent in the 70-year China-Pakistan relationship without a single flash point.

On the economic front, China continues to enjoy a prominent and well respected profile in Pakistan. With few states willing to invest in the country due to Islamabad’s domestic security compulsions, China invested in a 46 billion U.S. dollars economic corridor which has enjoyed extensive positive coverage throughout the strategic community in the country.

China-Pakistan Economic Corridor (CPEC) is regarded as a flagship project and lifeline for Pakistan given its domestic energy requirements with the establishment of special economic zones and industrial areas aimed at aiding Pakistan’s economy.

As a country already grappling with sovereign debt, China had provided concessionary loans to Pakistan and evidence of unconditional support as part of Beijing’s Belt and Road Initiative. Negative coverage of CPEC has often been met with harsh rebukes, denial of American propaganda and support directed at the Chinese stance of peaceful development and prosperity for all states in the region. The dedication of special security division or the SSD forces to guard CPEC from untoward events and extremism also highlights the significance Pakistan places on Chinese economic investments.

Chinese soft power continues to be visible in Pakistan with numerous Confucius institutes, avenues for technological cooperation and investing in the telecommunication sector hint at a strong grassroots level bond that Islamabad enjoys with Beijing.

Numerous Pakistani students have embarked on scholarships to study in Chinese universities and, amid the COVID-19 pandemic, China has provided Islamabad with critical equipment enabling Pakistan in dealing with the pandemic by keeping domestic cases in check.

Unconditional support, cognizance of domestic realities and strong strategic cooperation characterizes the history of China-Pakistan relations over the past 70 years. As the nation celebrates its 74th independence day, China is considered to be a time-tested and trusted friend on all fronts by Pakistan with relationship being nothing short of an unbreakable bond.

(If you want to contribute and have specific expertise, please contact us at opinions@cgtn.com)

Protest staged against ‘exclusion’ of Bajaur route from CPEC

Progress is in transit