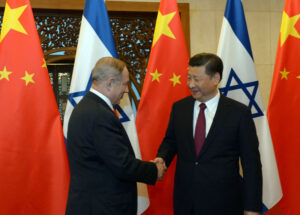 EXECUTIVE SUMMARY: Israel will be caught on the horns of a dilemma as China projects itself commercially, politically, and militarily into the Middle East. The commercially driven new Cold War between the US and Beijing will force Israel to make difficult choices regarding its economic and strategic interests.

The new Cold War differs from that which ended in 1989 in that it is not an ideological battle between superpowers. It is a trade-based clash of interests that is being played out in a more complex and globalized international environment. New players on the block include India, Turkey, and Iran. Israel has relationships with both protagonists of this new Cold War—China and the US—which could result in difficult choices for Jerusalem.

The US, Israel’s longstanding ally and supporter, has under presidents Obama and Trump shifted its focus away from the Middle East and toward the Pacific, particularly China. It has materially reduced its physical presence in Iraq and Syria and left if not a power vacuum at least a lacuna. In doing so, it opened the door for the object of its strategic readjustment—China—to fill that gap.

Now that the US is energy self-sufficient, its reliance on the Gulf has diminished. The main consumers of Iran’s and the Arab Gulf States’ energy resources is now the Far East. China is the destination of over 40% of the Gulf’s oil exports (not including Iran).

Beijing has projected its power into the sea routes leading from the Gulf, including the much disputed South China Sea. It has established a port and naval facilities at Gwadar in Pakistan and Djibouti on the Horn of Africa, which place it within striking distance of the Straits of Hormuz at the mouth of the Gulf.

China, which is growing increasingly powerful both economically and militarily, is deeply committed to its Belt and Road Initiative (BRI), which is intended to give it land and sea access to markets in Europe and Central Asia. The route lies more or less along the old Silk Road. China and Iran enjoy increasingly close economic and military ties and are poised to enter into a major economic and security agreement, developments that are naturally of concern to Israel.

When the Syrian Civil War eventually comes to an end, Syria will need to rebuild. Iran and Russia, its political and military backers, do not have the economic resources for so extensive a project. Beijing does have the resources, and is looking for port and naval facilities on the eastern Mediterranean coast as well as possible transit routes across Iran and Syria. China is thus the most likely beneficiary of the bulk of Syrian reconstruction projects.

China has acquired control over a major terminal at Ambarli Port in Turkey, a country ever more inimical to the West and Israel and one that is seeking to maximize its power and influence in the Mediterranean (through, for example, its involvement in Libya and its recently concluded Maritime Boundary Agreement with that country).

Israel, a small strip of land on the shores of the Eastern Mediterranean, finds itself in an increasingly complex web of competing interests.

Jerusalem has a burgeoning trade relationship with Beijing with a bilateral value in 2018 of $14 billion. In broad terms, Israel provides technology (including research and development for Huawei, which in itself could prove controversial); financial and technical expertise; and military hardware and components. China in turn provides capital and labor for infrastructure projects including port facilities at Haifa and Ashdod, manufactured products, and consumer goods. Currently Israel’s second-largest trading partner, China could become Israel’s largest export market within the next year or so.

On the other side of the balance sheet, however, the significance of the Israeli market to China is small, though access to Israel’s high tech is of some value. If Beijing can secure access to the Mediterranean elsewhere, Israel’s strategic benefit to China will diminish.

As the Cold War heats up and China becomes increasingly embedded, both economically and militarily, in countries in the region that are hostile to Israel, and if Israel yields to US pressure to restrict the export and transfer of military and dual-use technology to China (as it almost inevitably will), it may face Chinese sanctions or retaliation.

One need only look at the Chinese reaction to Australia’s insistence on an inquiry into China’s conduct over COVID-19 and the threats made by its ambassador in London following the exclusion of Huawei from the UK’s 5G network to see China’s willingness to exert pressure.

Israel is likely to face hard choices in the upcoming months and years. While it is almost inconceivable that it would pivot away from the US and toward China, it remains an option.

A less benign US administration might make such an option more attractive, but it would have to be approached with extreme caution. Israel’s neighbors have far more alluring baubles to offer Beijing than does Israel. Jerusalem should think long and hard before jeopardizing its relationship with the US.

Harvey Jaskel has a Masters in International Relations from the Department of War Studies, Kings College, London.